You are here: Home / Archives for Green Lantern

I don’t know what your plans are for 2011, but I’ll tell you what, from what I can see coming on the horizon, it should be a great year of super hero movies! Checkout these trailers! I’m hoping a number of these will turn into a few “Guy’s Nights”.

Iâ€™m a huge fan of super hero movies, but The Green Hornet was NOT kid friendly by any means. My son is really looking forward to The Green Lantern coming out and Iâ€™m really hoping itâ€™s a little more family friendly than that other movie. From what I can see from the trailer and the fact that itâ€™s starring Ryan Reynolds instead of Seth Rogen, I think our chances are good.
[youtube]https://www.youtube.com/watch?v=K5sN-8CxoL4[/youtube]
For the last couple of weeks my kids and I have also had the opportunity to play with some new toys that are being released by Mattel in conjunction with The Green Lantern movie. 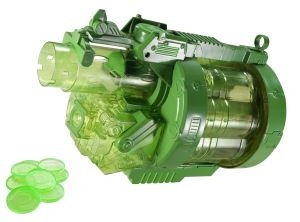 We received one of the action figures and the Colossal Cannon to play with. The kids have really enjoyed playing with the cannon. My 8yr old daughter has also enjoyed the cannon as well. It shoots little discs, fairly accurately I might add, and lights up with sounds. Being a guy, my son and I really like the Colossal Cannon. I mean come on! It shoots things, makes noise and lights-up!

The Colossal Cannon actually looks much cooler than the photo to the right looks. This photo makes the cannon look much more Army olive green instead of the cool Green Lantern color. One of the great things about the cannon is that it uses LED lighting and shoots quite a few of those little green discs. Enjoyment and battery life should both be long-lasting with this little puppy.

Check out this short little video of this thing lighting up and shooting in the dark!

The action figure is a little less interesting to me, but thatâ€™s because Iâ€™m a huge G.I.Joe action figure nut. I grew up playing with those all the time and love the bendable joints, twisting wrists and kung-fu battle grip! Figures that donâ€™t bend at the knees and elbow fall just a bit short. However, the sculpting on these figures is very good! Check-out these photos (click image to enlarge). 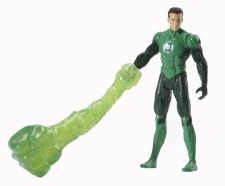 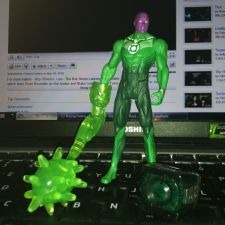 The Abin-Sur figure also came with a cool Green Lantern ring, sadly it was WAY too small to fit on my finger in the place where my high school class ring used to be.

Now, Iâ€™ve just got to decide if I would be too much of a dork to take the Colossal Cannon with me when I go see the movie. What do you think? Yay or Nay?

Note: I wrote this review while participating in a blog tour by Dad Central Consulting on behalf of Mattel and received Green Lantern toys to facilitate my review and a promotional item to thank me for taking the time to participate.

It still surprises me the number of people that get taken by these types of spam emails, normally … END_OF_DOCUMENT_TOKEN_TO_BE_REPLACED

For many people, drinking several cups of coffee a day is a lifestyle choice. So, considering how … END_OF_DOCUMENT_TOKEN_TO_BE_REPLACED