You are here: Home / Humor / Playing Make Believe as An Adult 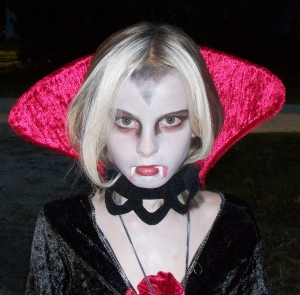 Did you dress-up as a kid and play make-believe? Did you have costumes that you'd wear to help make the experience even more fun? I didn't really ever do that. Oh, I'd imagine I was somebody, some kind of character, but I wouldn't really take it much further than that as far as dressing up. As I've gotten older and have had my own kids, I've noticed a few families that have entire trunks of costume stuff that their kids play with too. Our kids never really did that much, I'm curious is that's because of my own childhood coming through, or perhaps they just weren't interested in it either.

I grew up in a very conservative home as well. We didn't really celebrate Halloween for the majority of my childhood years while my dad was actively pastoring a church. We had our versions of parties though and yet I still didn't ever really get into the whole dress-up thing. Perhaps the closest I ever came was being involved in drama and acting in a variety of plays, but that's a whole different thing isn't it?

I know a number of adults that still dress-up and attend parties though. Do you? Maybe it's not a Halloween party where you'd need aÂ Halloween fancy dressÂ costume of some sort, but maybe it would be a masquerade party. The other big thing now is cosplay. You've seen this, think all the people dressed up as characters from comic books, super hero films and video games. Lots of people do that these days. There's definitely an entire industry available for people that are interested in this activity as adults.

Maybe I'm just boring. I guess I have a variety of other ways I'd prefer to spend my time and money than dressing up. Come to think of it, I don't spend a lot of money on the clothes I wear every day, it probably makes sense that I wouldn't spend or invest the money on clothes for playing make-believe as an adult.

It still surprises me the number of people that get taken by these types of spam emails, normally … END_OF_DOCUMENT_TOKEN_TO_BE_REPLACED

For many people, drinking several cups of coffee a day is a lifestyle choice. So, considering how … END_OF_DOCUMENT_TOKEN_TO_BE_REPLACED