You are here: Home / Archives for DIY 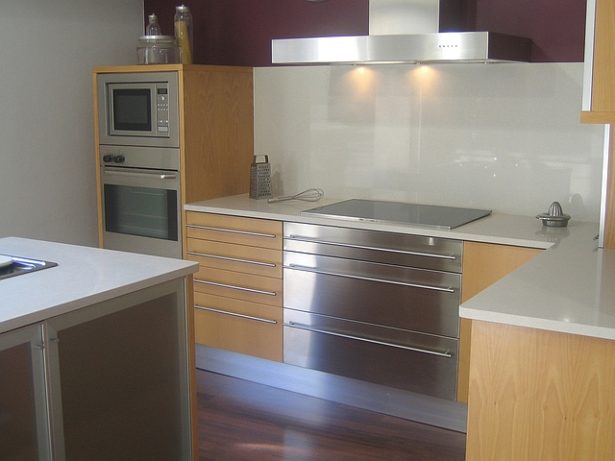 The kitchen is the room in the house that is used the most and has the most foot traffic. A badly planned kitchen can make the simplest of tasks seem like an Olympic trial; with too little countertop space, a sink that you can’t wash the dishes in easily, and bad lighting, accidents are waiting to happen. Maybe you're looking to improve water quality by getting cleaner water with new filtering system.

Successfully planning your kitchen will reduce any construction chaos down the road, whilst helping you to stay within your budget. To help you create the kitchen of your dreams in the quickest possible time, read our top tips on how to plan a kitchen remodel.

The first thing you must do is review your current kitchen design. You must measure everything to ensure you have the right dimensions before you install a new kitchen. Don’t forget about doorways, too. One big mistake many homeowners make is buying an extra-large fridge that they are unable to squeeze through a doorway.

Do you live in a busy household? If so, you will need to ensure there is enough space for more than one person to move within the kitchen. This will ensure everyone can make use of the space at one time, so there are no arguments or frustrations within the home.

For instance, you should consider ergonomics when considering a kitchen design. For example, you could install an adjustable counter top that moves up and down, or can feature pull-out shelving in the base cabinets. This will make the kitchen a fun space to cook up a feast with the whole family.

Do you have no experience when it comes to a kitchen remodel? While it might be tempting to do the hard work yourself, you should hire an expert to professionally complete the job. You simply need to research a skilled builder near me to hire a qualified, experienced kitchen fitter, who can make the installation process a pushover. If you fail to hire a professional, you could unfortunately pay the price for any small or large mistakes you make along the way.

To effectively prepare for a kitchen remodel, you should expect the unexpected. This means leaving a little wiggle room in your schedule for a hold-up or issue that could prevent the installation from being completed on time. So, if you want the kitchen to be remodeled in time for Christmas, aim for it to be finished by Thanksgiving.

Do you want to install your kitchen at the quickest possible time whilst eliminating costs? If so, we recommend you keep the kitchen footprint as it is. Don’t knock down any walls, or change the location of electrical outlets or pipes, as this can cause significant delays that could slow down progress and could leave you kitchen-less for a long time. Speed up the process by keeping the pipes, outlets, appliances and walls in the same location. It will minimize delays and expensive reconstruction fees. One change you can make without touching the footprint is to protect yourself with a good home warranty to avoid those unplanned surprises when one of your appliances does break-down.

Don’t compromise on quality for the sake of $50, and choose products that are both durable, functional, stylish and low maintenance. For example, a solid countertop might cost a little extra, but you can trust they will stand the test of time. You should also consider products that come with an extended warranty for peace of mind.

I participated in a campaign on behalf of Mom Central Consulting for Delta Faucets. I received a product sample and promotional item as a thank you for participating. I understand them, but disclosures bother me. So, now that we’ve got that out of the way.

My wife has been wanting to do a little upgrade to the guest bathroom in our house for a little while. So when I came across the opportunity to participate in this campaign for Delta Faucets (they also make toilets), I had to go for it and crossed my fingers. Luckily, I got picked and all was good. Eventually we got the logistics worked out with FedEx to get the toilet shipped to us and we pulled it off the truck and I sat it in my garage. As a normal guy, I figured I’d get to it “next week” when I had some more time over the weekend. Time passed and then all-of-a-sudden I realize I’ve got to get this thing installed and this blog posted! Luckily, it couldn’t have worked out any better, my wife and son were away all week at camp so I got to surprise her by having the whole project completed when she got home today.

Men, tell me if your wife does this kind of stuff. I tell her that I’ve got a way to get the toilet replaced and she asks if since we’re pulling the toilet up, can we also replace the flooring while we’re at it? And by “we” that means “me”. This actually did make sense as we had a roll of linoleum that was left-over from the construction of her mom and dad’s new house so we didn’t have to buy anything else. I figured as small as our bathroom was, it wouldn’t be that hard of a job either. Long story short though, since I was crunching the clock to get everything done this week with lots of other stuff on my plate, I called a friend of mine to see if he still did flooring. He did, he was to come yesterday morning and get the vinyl installed. Only one problem, when he got here I discovered the piece of vinyl I’d been hanging onto in the garage for about 8 years was a foot too small. We had to go out and buy a new piece to fit. Let the stress begin. Guys, have you ever decided to pick-out something for the house like paint, carpet or linoleum without your wife’s input first? You’re just crossing your fingers hoping you pick correctly. I did my best to try to pick something close to the pattern of what she was already expecting, and also something that I could get for a good price since I wasn’t planning on having to buy anything in the first place. 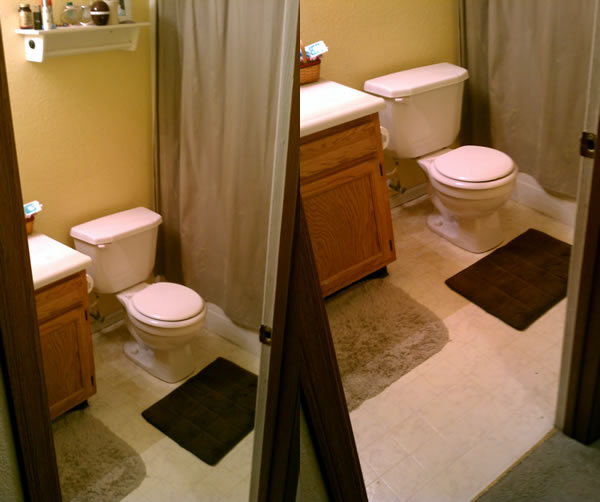 On Wednesday night I did most of the work of getting the old toilet pulled out. I’ve got to hand it to Delta. Included in the box with my new Corrente Toilet was the EZâ„¢ Out Toilet Removal Kit. It included a pair of disposable gloves (because we all know the cleanest a toilet will ever be is right before you put it in your bathroom), a disposable scraper for getting the old wax ring out, a super absorbent sponge for soaking up the last bit of water out of the tank before disconnecting everything and a cloth for cleaning everything up and popping in the drain hole, because trust me, you will drop something down in the hole if you’re not paying attention.

Thursday morning after the new flooring was down and had set for a little bit, I got started on installing the Delta Corrente Elongated Water Saving Toilet in our guest bathroom. I’m not sure this couldn’t have gotten any easier for me. I prepped for the project by watching a video on How to Install a Toilet. I’m generally pretty handy and have replaced all the internal stuff on a toilet before, but have never replaced an entire toilet. The folks at Delta have really thought of everything and made this a really simple task. 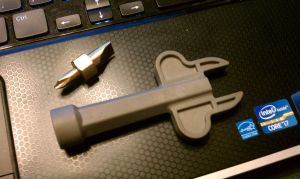 The new toilet has everything you need to install it included in the box. They give you a new set of mounting bolts for the flange on the floor and a new wax ring (after I pulled out my old toilet I discovered it never had a wax ring installed – stupid, cheap Crossman home builders!). The other nice thing about this toilet is that it comes in a two-piece design so that the tank is separate from the bowl, which makes lifting and placing in your bathroom much easier. Once I got the bowl put down on the new floor with a nice seal around the wax ring I used the included SmartFitâ„¢ Multi-Tool to secure the nuts down on the mounting bolts from the flange. Popped the include aesthetic covers on and I’m all set.

Next up was the tank. It was all ready to go with all the needed valves and hardware on the inside pre-installed. It even included a metal threaded casing water supply line attached directly to the tank and feeds to the top of the tank instead of the bottom, helping minimize connection points for any leaks that might have occurred. I again used the Delta SmartFit Multi-Tool to tighten the supply line onto the supply valve coming from my wall. The back tank mounted to the bowl by sitting on a rubber gasket and lining up three pre-installed threaded bolts that went through three matching holes in the bowl structure. Â Another nice feature is that the bolts on the tank were attached through a metal mounting bracket which would make it near impossible to over-tighten and risk cracking your new bowl. I again pulled out theÂ SmartFitâ„¢ Multi-Tool tighten the nuts on the assembly.

Last steps were to a little tag from the fill-valve that reminded me to take the rubber band off the flapper valve. Put the lid on the tank, turn on the water supply and then attach the toilet seat. The Corrente features a Quick Release Seat option that has a mount that first attaches to the bowl (again using the SmartFitâ„¢ Multi-Tool)Â , and then the seat mechanism slides onto the mount and locks securely. Another nice feature that makes removing the seat for a quick cleaning a little easier. Start to finish, I was probably done in 30-45 minutes tops. So easy.

Happy With the New Throne 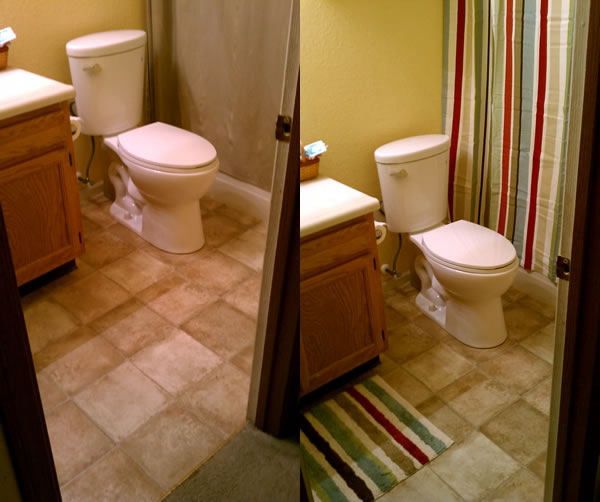 I’ve been using the toilet now for a couple of days and I can tell you I’m very pleased with everything. The Corrente model has an elongated water saving design and my daughter immediately noticed that it sits a little taller than our previous toilet. That’s because all Delta toilet models offer ADA compliant chair height that makes popping a squat and taking your stand a little easier! I’ll be looking to save a little green over the year with the water savings for this toilet model as well. Normally I worry about water saving toilets not having enough oomph to power through a big load, but at only 1.28 gallons per flush, this puppy has been doing just fine and I’ll hopefully be seeing almost $100/yr in water savings.

Now, the only downside is that I’ve got just enough linoleum left over from the piece I had to purchase to replace the flooring in my wife’s bathroom. I’m sure if I’m going to be replacing the flooring, we might as well replace the toilet while we’re at it. We’ll definitely be looking at getting a matching Delta Corrente for the wife’s throne as well.

Photo via Pexels Are you growing your business? In business, if you’re not innovating, you’re … END_OF_DOCUMENT_TOKEN_TO_BE_REPLACED

One of the things I love finding when I uncover the Internet is not just a cool website or topic, … END_OF_DOCUMENT_TOKEN_TO_BE_REPLACED

Getting a professional paint job for a house in Lakeway, Texas, is easy. There are many options to … END_OF_DOCUMENT_TOKEN_TO_BE_REPLACED