You are here: Home / Technology / LED Bulbs – Putting Cash Back into Families Pockets 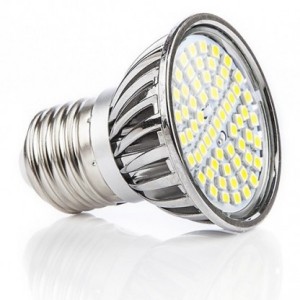 Time was when incandescent bulbs were the default lighting choice for the home. However, incandescent bulbs are notoriously inefficient. Ninety percent of the energy entering the bulb ends being spent on heat. The other ten percent goes to lighting. Needless to say, consumers pay a lot for electricity on standard bulbs that needs frequent replacing.

Most would be surprised to know that the technology behind a home white light bulb was revolutionary enough to win a Nobel Prize, but it did. What makes LED bulbs so exciting? The efficiency and lifespan are two major factors.

A 6 to 8-watt LED bulb produces about 3.4 BTU's of heat per hour. An equivalent 60-watt incandescent bulb produces 85 BTU's per hour. The low BTU percentage of an LED bulb means that almost all the energy coming into it goes into lighting. With that kind of efficiency, it's easy to see why LED bulbs cost much less to operate than standard bulbs.

For lamp users that like the option of a dimmer switch, LED bulbs offer that option. They are also more rugged than standard bulbs, which means they won't shatter if bumped. Cold weather is no problem for LED bulbs either. The have been shown to perform dependably in very cold temperatures.

Now that the advantages of LED bulbs has been explained, a true financial comparison is in order. In a house using thirty 60-watt bulbs, the average annual energy cost will be around $330. Thirty equivalent 6 watt bulbs will cost around $33. This is only the expense for electricity and does not count lifespan.

Factoring in lifespan, LED bulb savings rise precipitously. In a house using 25 bulbs, over the lifespan of 50,000 hours, the savings approach $6,700 over incandescent bulbs.

Consumers looking to buy a new computer, dining room set, or beds for the kids, can save up for these and other items quickly simply by switching to LED bulbs. The electric company gets enough money already. Give LED bulbs a try and keep the money in the family.

It still surprises me the number of people that get taken by these types of spam emails, normally … END_OF_DOCUMENT_TOKEN_TO_BE_REPLACED

For many people, drinking several cups of coffee a day is a lifestyle choice. So, considering how … END_OF_DOCUMENT_TOKEN_TO_BE_REPLACED