You are here: Home / Archives for family vacation

Less than 24 hours ago my family and I left Indianapolis at midnight and headed south for family vacation. I'm sure it will come as a giant surprise to no one that we were heading to Orlando and Walt Disney World. Hoping to have some other travel posts related to this trip published soon, but want to pop this one out about our first night's hotel stay.

Our First Night of Vacation at the Rosen Shingle Creek Resort in Orlando, FL.

First things first, we didn't have any awareness of this hotel prior to making it to Orlando. We ended up leaving sooner than I had expected to get to Florida since we don't check into Walt Disney World until Saturday. We left thinking we'd drive as long as the two of us could and then just Priceline a hotel wherever we were at and crash for the night and wrap up the drive the following day.

My wife and I (and the kids) have become troopers at this type of thing and we finished the drive in Â about 15 hours, and that included a couple of hours of stops for meals, gas, bathroom breaks and driver switches. So during a late lunch while stopped at a Taco Bell with free wi-fi I fired up this laptop and waited to see what we could get.

I won't tell you what amount I used to "name-my-own-price" with the Priceline.com Negotiator app, but let's just say it was a fraction of the standard room rate for the property.

As you can see, not much to comment about and two of the three come out just because I'm a cheapskate. Here I am complaining about a few additional charges when I got a fantastic deal on the room. But getting a great deal on the room and then paying a significant portion of that same amount for other amenities just rubs me the wrong way. I say add a few bucks to every room rate and offer free wi-fi and parking and promote that amenity.

Having spent a number of years in the travel industry and not recognizing the "Rosen" brand, I started doing a little research. It turns out that Harris Rosen, was recently named Central Floridian of the Year. He appears to be quite the philanthropist. I also found it interesting that he operates the majority of his hotel properties with almost zero debt. He's personally and privately funded a number of public initiatives for his community as well as a variety of great sounding programs for his employees and associates.

So, here's the final line. Definitely put this hotel in your sites for your next visit to Orlando. Use Priceline and I think I can safely say that regardless of the price you pay, you'll be getting your money's worth.

With the chilly weather descending upon Indianapolis this week, I'm really starting to miss this place more and more. 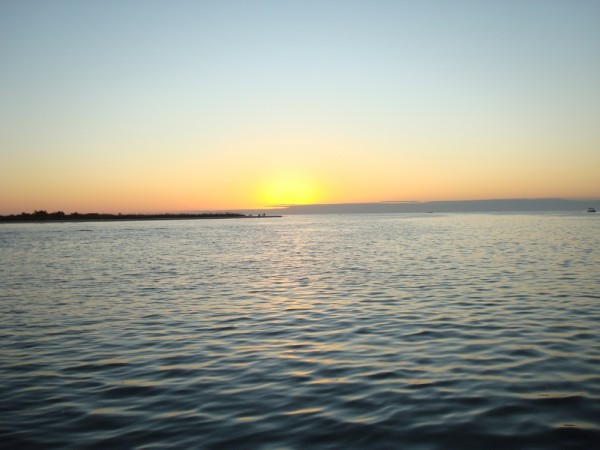 To some degree when my family visited the Georgia Aquarium at the beginning of our vacation, we were just going to one of the attractions in Atlanta that we thought would be a good educational stop for our kids. What we may have done is ruined our perception of any other aquarium or aquarium like attraction in our future. You see, everything we saw after that with any relevance or relation to fish, was compared to it, and just didn't compete.

The massive scale of the aquarium and its exhibits are really what makes this Atlanta tourist attraction shine. The aquarium also has the benefit of being new, they're just celebrating their 5th birthday, so they've had the advantage of taking great ideas from other aquariums, combining it with the latest technologies and making an absolutely first-class experience.

The facility features five main areas or sections to explore:

Here's what the official website says, about this individual exhibit:

This exhibit was specially designed to house whale sharks, the largest fish species in the world. Schools of predatory trevally jacks, squadrons of small and large stingrays, enormous goliath grouper and hammerhead sharks all ply the waters of this ocean habitat containing more than six million gallons of saltwater. With 4,574 square feet of viewing windows, a 100-foot-long underwater tunnel, 185 tons of acrylic windows and the second largest viewing window in the world at 23 feet tall by 61 feet wide and 2 feet thick, visitors will have multiple opportunities to view all of these magnificent animals. No other aquarium in the world has ever attempted to manage the variety and size of fish in this major exhibit.

Even with the description and images, you just don't understand the scale of the exhibit until you've seen it in person.

There are a variety of other shows and exhibits to see, but the core exhibits are what shine and that's where I'd plan on spending all of my time on my next visit.

Without a doubt, the most amazing aquarium I've ever seen, and I've been to quite a few major ones. If you're in the area and looking for things to do in Atlanta, the Georgia Aquarium needs to be on the very top of your list, even your Bucket List. Thanks for ruining my experience everywhere else I go now though.

It still surprises me the number of people that get taken by these types of spam emails, normally … END_OF_DOCUMENT_TOKEN_TO_BE_REPLACED

For many people, drinking several cups of coffee a day is a lifestyle choice. So, considering how … END_OF_DOCUMENT_TOKEN_TO_BE_REPLACED