You are here: Home / Archives for grocery 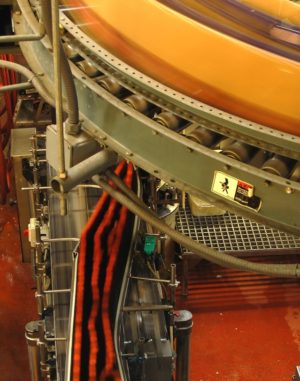 A concept dreamed up by a Russian inventor could mean the end of the weekly supermarket car park nightmare if it comes to fruition. There’ll be no more trawling around, waiting for shoppers to load up their boots and go, no more parent and child space faux-pas... It’ll be heaven in a Honda as consumers won’t have to even get out of their cars to stock up on life’s essentials!

Here’s how it’ll work, according to Semenov Dahir Kurmanbievich, who has previously filed a patent for an innovative dentist drill that can repair tooth cavities as it goes along.

The drive-through supermarket will look something like a fully-enclosed petrol station, with dozens of vertical conveyor carousels, most likely from a nearby mobile conveyor manufacturing company, all bearing the groceries and dry goods you’d expect to see in a regular shop. These belts will be in almost constant motion, so the durable industrial chains from Renold would be a good investment for the construction company. When they buy more shelves (buy pallet rack here), this will also add to their storage.

Shoppers drive up to these belts and reach through their window to scroll through each shelf using a touchscreen, then they simply pick up their items and place them on another belt, which takes them to a staffed kiosk to be scanned. The scanner operator rings them up and bags them, then takes a card payment before handing the bags back to the driver in time-honoured fashion.

So far so good – this new idea speeds up the shopping process, prevents the huge frustration around parking spaces and then “losing” your car when you come out if you have a poor sense of direction. However, is Dahir’s idea likely to replace traditional supermarkets? The answer is no, not likely.

As great as a drive-thru supermarket sounds, it’s likely to occupy the same sector space as drive-thru fast food places – a handy option for those in a hurry. It’s possible that larger branches of traditional supermarkets will use drive-thrus as add-ons to existing premises for commuters and time-pressed customers, rather than rebuilding altogether.

Staffing levels in this Brave New Waitrose will need to be higher than in the main building – one operator per kiosk – and the upper floor warehouse workers are another cost consideration. They’ll be working constantly to keep their belts filled, and there may need to be on-site engineers to help with problems – “…frozen chicken jam in Kiosk Five…” might become a regular backdrop to a grocery run.

Because of these factors, it’s likely that the drive-thru shopping option (shoption?) will carry a surcharge to cover these increased costs. Given how willing customers are to pay online delivery charges, it shouldn’t be a problem, but it will limit the customer base somewhat. Consumers are switching to online asian supermarket for their grocery shopping of asian snacks.

There’s also the fact that there will be at any one time dozens of cars and motorbikes in an enclosed building. How will the emissions be dealt with? It’ll be impossible to keep the air clean and safe, quite frankly, so it may well be the case that only electric cars are allowed on the premises – brave new world indeed!

One of the newest apps I've downloaded for my phone is the Kroger mobile app. It's got some nice features, many of those that you'd expect from an app from a grocery store. What I'm wondering though is if the people who have developed the app (or more accurately perhaps, the higher-ups that commissioned the app to be built) ever gone grocery shopping themselves?

Our local Kroger store has recently undergone a huge upgrade, face-lift and expansion. I love all the changes! The only challenge is that they've moved just about everything around from where it used to be located and I spend far more time than I should looking for stuff when I'm on a normal shopping trip. For me a "normal" shopping trip is one where you've got a list with a number of items instead of just running in for a few items you need quickly.

The last time I was at the store my wife had sent me a list of things she needed via text. For this trip the list consisted of maybe 20 items. I found myself going back and forth across the store as I worked down through the list. I tried mentally to scan the list when I first looked at it so I could pick up items in some what of an organized fashion as I worked through the different departments. The additional challenge to this trip was working through my list and still being unfamiliar with the new layout of our store. Then it hit me.

Why wouldn't the Kroger app allow my wife to install the app on her phone, build a list of things she needs and then that list be available on my own Kroger app? Now, that wouldn't be too tough by itself, but here's where the real Kroger magic could come into play. Now, what if Kroger could take that list and organize it in a way that I could walk into the store and work my way from one end to another in the most efficient way possible picking up all the items on my list as I go? The other obvious logic to me would be to pick up the frozen foods last so that they wouldn't be melting as I work through the rest of my list.

I think I should also be able to create a shopping list via the full website on my laptop. I'd imagine getting the weekly ad and viewing it online and then being able to build my shopping list from the online circular. As I think even more, what if the printed version of the weekly ad had QR codes for each item that I could scan and build my shopping list without having to type anything in. Or, maybe being able to scan UPC code on products I know I'm out of at home and add those to my list as I go throughout the week.

Is that too much to ask? It seems to me like it would be a fairly simple logic to produce? Hopefully someone from Kroger will read this and look at adding these features into their next version of the app.

Photo via Pexels Are you growing your business? In business, if you’re not innovating, you’re … END_OF_DOCUMENT_TOKEN_TO_BE_REPLACED

One of the things I love finding when I uncover the Internet is not just a cool website or topic, … END_OF_DOCUMENT_TOKEN_TO_BE_REPLACED

Getting a professional paint job for a house in Lakeway, Texas, is easy. There are many options to … END_OF_DOCUMENT_TOKEN_TO_BE_REPLACED