You are here: Home / Archives for Indianapolis Indians 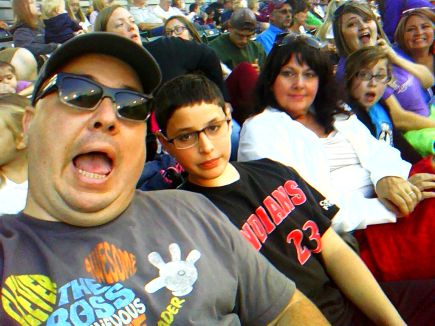 Our family has gone to more Indianapolis Indians games this season than I think we have every other season combined perhaps. This week, we attended three games and enjoyed every one of them, even though the Indians lost two of them closely to the Columbus Clippers. Our first game this week was on Tuesday night, the Indians trailed the entire game. Then, in the last inning with two outs, the Indians pulled together a string of hits to tie the game and force extra innings. They eventually rallied to win the game. Many fans left early. It was kind of chilly and breezy all evening and thinking it was over, the ballpark had almost emptied. My family and I hung around. For me, for a variety of reasons, the least of which wasn’t the fact that if I go to an event like this, I stay until the last out, the final minute, the ending bell.

We’ve taken advantage of the Knot Hole Kids Club, so that our kids get in free or we upgrade their seats to box seats for a small price. By taking advantage of this and other ticket deals like 2-for-1 Tuesdays with McAlister’s and other ticket promos, it makes for a good 3-4 hours together as a family and lots of fun at an absolutely gorgeous Victory Field ballpark.

We’ve been laughing a bit amongst ourselves though because as much as we love the Indians, it appears we just can’t get any love from them! They do a Twitter photo promo during the game where you send a picture of yourself having fun at the Indians game and tweet it to their Twitter account @IndyIndians with the hashtag #ComeCelebrateSummer. We do this every game and we’ve yet to get our photo on the big screen! Apparently my face is just too hideous to be enlarged onto the jumbotron. Here are a couple of the photos we’ve posted that haven’t been chosen. 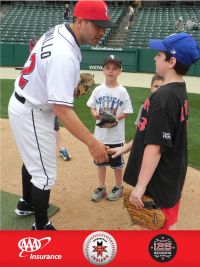 My family and I were able to take in an Indianapolis Indians baseball game last night. It was part of my son’s baseball league event and there was a little baseball clinic that the Indians coaches and players did that allowed the kids to come out on the field and practice various skills with the players.

With all of that going on there was obviously a proliferation of kids in the stands.

My patience was waning.

From the point I started counting, the kids in front of us got up from their seats and tried to exit their row 74 times. This required a tall friend of ours to get up every time. The kids got up to ask their parents (sitting a row ahead and on the opposite end) questions, go to the bathroom, talk to someone else and who else knows what for all of those events.

Are the parents paying attention? Do they care?

At one point if I thought to myself that if my son were talking to me and giving me the looks this boy was giving his dad, the game would be over and there would be a list of other removals of privileges and perks from his life. One particular demand from the boy, in a stern voice, with face Â tightened and teeth bare he said “GET ME SOME FOOD!” The boy would have been lucky to eat another morsel of food the rest of the day if he were mine.

I’m not really a fan of people telling other people how to parent their kids, but man was this unacceptable behavior.

Am I wrong? Should I have said something directly to the kid? To the parents?

Help me out folks.

It still surprises me the number of people that get taken by these types of spam emails, normally … END_OF_DOCUMENT_TOKEN_TO_BE_REPLACED

For many people, drinking several cups of coffee a day is a lifestyle choice. So, considering how … END_OF_DOCUMENT_TOKEN_TO_BE_REPLACED