You are here: Home / Technology / Apple vs. PC – A House Divided 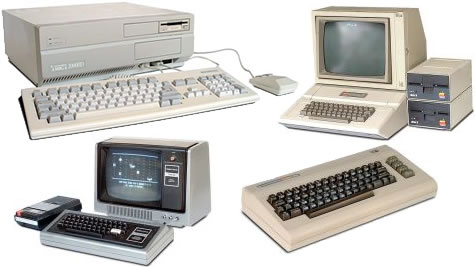 My first experience with computers was on an old TRS-80. Yep, we saved our little animation projects and games on a cassette tape and we could hook it up to any old TV in the house. Those were the days. Not long after that I got my first taste of computers in school with the Apple II and Apple III computers. Back then the educational gaming was in the form of “Oregon Trail” and “Where In the World is Carmen San Diego?” and “King’s Quest” if I remember correctly.

Later on I got to play on the Commodore 64 when I went over to my friend Jeremy or Joe’s house. There were many sleepovers where no sleep was experienced, that time was set aside instead for all night computer games.

Later in high school our art department had an Amiga 2000 that I got my first real experience with computer animation and graphic production. My first animation was a 3D globe that spun on the screen like it was in orbit. That was cool! From there we sometimes got to use some old Gateway computers (I think?) for working on some papers using WordPerfect that would then get printed off on the old buzzing, dot matrix printers.

In college, a divided my time kind of evenly between the Mac computer lab and the PC lab. This was also my first experience with the Internet. Seems like so long ago.

As you can see, I’m comfortable on a number of platforms, but for the majority of my adult life I’ve been a PC guy. IT seems at a point a couple of months ago the computer processing planets aligned and did their best to try to push me back over to the Apple side of the force. Within a period of about two weeks our household gained a used Macbook from a friend, an iPad from another friend and I was even asked to try out a new iPhone 4 on Verizon’s network.

Although I put up a strong front about not liking Apple products, in all honesty what I don’t like the most is the attitude that usually comes with the Mac-heads and the higher price you have to pay to decide to use Apple instead of a PC. There are things that Apple does on their OS and within their computers that I like:

… are someÂ and then there are things that I don’t like:

One of the biggest arguments you’ll usually hear from Mac-heads is that if you want to do anything with graphics, video or music you should definitely use a Macintosh. I’d argue that there’s nothing you can achieve on a Mac that I can’t achieve on a PC.

You’ll also hear that Apple is more secure and never crashes and other similar statements. I would agree with that, but the reason I do is because the Apple market share is so small (yes, I know it’s growing and quickly) that there’s not a very big target on Apple for any hackers to worry about. If someone were looking to infect and control a large network of zombie computers, why would they start with a small market share right off-the-bat? In addition, if Microsoft produced their own hardware and limited to their OS to only operate on that hardware and not work with anything else, they could lock down their own systems more significantly and make sure that their equipment worked with their software as seamlessly as it appears Apple can achieve.

So now we’ve got a divided household.

When my wife said she wanted to get an iPad and our son the Macbook, I told her that I wouldn’t be able to be the tech support for the family quite as easily as I have been up to this point. It wasn’t something I was too worried about as I figured as I spent more time on the two devices I’d learn more about them and be able to support them with questions. The challenge is between the two kids and my wife, rarely are the two items left unused and available.

As I’ve told people many times. If someone wanted to give me a new, beast of a Macbook Pro. I’d probably consider switching. But I’d dual-boot it with Windows 7 and be on my merry way. The costly challenge to me converting to Apple is when I do it for my own personal use I’ll probably go whole-hog all-the-way, and I just don’t have the thousands of dollars that that little endeavor would cost right now.

It still surprises me the number of people that get taken by these types of spam emails, normally … END_OF_DOCUMENT_TOKEN_TO_BE_REPLACED

For many people, drinking several cups of coffee a day is a lifestyle choice. So, considering how … END_OF_DOCUMENT_TOKEN_TO_BE_REPLACED