You are here: Home / Archives for Dad Central Consulting

I participated in an Influencer Activation on behalf of Influence Central for TruGreen. I received a promotional item to thank me for my participation.

Since our recent move to a new state I think my family is really working harder to enjoy more of our life outside. One of the things we've really enjoyed adjusting to in our new home is not just the added square footage we have inside the home, but also the significantly larger area available in our yard surrounding our house. Our property with indicated house address numbers is significantly larger than our previous home as you can see in the images below and we've already spent more time outside as a family here in a year than we really did previously almost the entire time in the previous house.

I'm probably somewhat weird as well in that I actually enjoy the action needed to take care of the yard. I actually enjoy mowing. My wife will say to a fault because she'd like for me to hand off that task to my son for him to be responsible for, but I don't really want to give it up. When we lived in Indiana I had contracted with TruGreen to come and take care of the yard, (TruGreen Schools Me on the Science of Lawn Care) it was very cheap given the size, but I could really tell a difference after using their service for awhile. The yard did really start to green up and get thicker and more lush growth as we continued.

TruGreen has been running a promotion for more families to #LiveLifeOutside and they even did a large survey to find out how many American's felt about how much time they're spending inside or outside. The results were interesting. Here's just one of the stats that were discovered:

The Great Outdoors is Calling: More than half of Americans surveyed said they want to spend more time outside, and about twothirds of all respondents, or 68%, say they are spending less time outside compared to five years ago, reflecting the tendency that perhaps we aren't stepping outside into the fresh air as often as we'd like toor perhaps even as often as we shouldfor a healthy balanced lifestyle.

As we experienced as a family already, if you've got a nice yard you're going to be interested in spending more time outside and enjoying it. The other great thing about getting outside in your own yard is you're far more likely to actually see and meet your neighbors. Being new residents of our neighborhood, this has definitely helped us. My wife and daughter have made it a habit now to spend time walking the neighborhood with families. The other thing I've noticed is that being in a neighborhood where other homeowners care about their yards is an inspiration to others to invest and care for their own. Don't live in a neighborhood like that? Perhaps you can be the influence your neighbors have needed.

If we weren't just renting our current home, I'd more than likely be checking into having TruGreen come out and start some applications and maintenance on our yard here in Tennessee. I was especially curious last year during the early fall because I had some significant silvery growth on large areas of my yard. I believe it was some kind of fungus due to all the rain we'd had on a regular basis. I'm sure TruGreen could have taken care of that issue for me well.

As I was saying before though, we're really enjoying our new house and yard. We've even gone outside in the backyard together as family and with friends and played ultimate frisbee. In addition to recreational activities, my daughter and I have also started our first raised bed garden so that's bringing us outside more as well. With the addition of our small, back deck with Aluminum Deck Railing Kits, I've found myself sitting out there every now and then and just enjoying the great weather, the sounds of the neighborhood and some spectacular sunsets. I'm also planning to upgrade our landscaping by adding exterior lighting with the help of an expert in landscape lighting North Palm Beach, FL and I'm also looking into repairing our well pump through services that provide well pump repair in Sammamish, WA. Now I just need to work on replacing our BBQ grill we decided not to move with us to the south (regret that now but at the time it was a good reason and motivation to buy myself a new one).

Here's an interesting infographic from TruGreen with a variety of stats and information about what it means to really live outside and spend more time together outside as a family.

I can say that one of the other things we enjoy doing as a family is camping and hiking. We just got back from a short camping weekend with friends in southern Indiana. It was another reminder to me of just how much I enjoy being outside. It was very tough for me to leave though and know that I was unplugging for the weekend away. I had lots (still do) of work to do that I wasn't sure how I was going to try to stay on top of everything. What I realized afterwards though was that once I returned from the break and from being outdoors and really resting, I was re-energized and rejuvenated and more productive upon returning than I had been prior to leaving for the weekend.

TruGreen has some pretty funny videos now promoting more of their #LiveLifeOutside campaign with a family called the Yardley's who literally live outdoors like we live indoors. Check-out one of the videos below:

They're also running a Facebook promotional event as well.

For more information about TruGreen and their #LiveLifeOutside campaign, you can visit their social channels by clicking on the icons below: 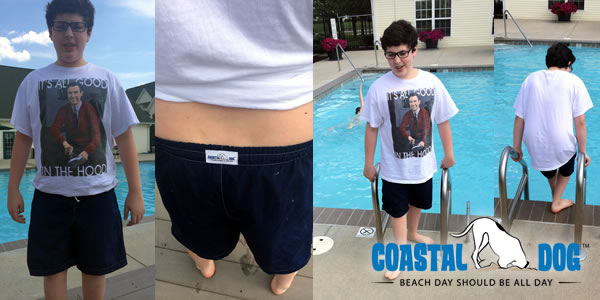 I participated in a Blogger Activation on behalf of Dad Central Consulting for Coastal Dog. I received a product sample to facilitate my review and to thank me for participating.

The weather is warmer and the sun is bright! What that means in my family is that usually my wife and kids are going to be spending more time at a swimming pool and enjoying the warm, summer days and cool, relaxing water. My son is quite the swimmer, but does something that's always bothered me. It's a pesky little thing, but I just never understood why he did it until recently. You see, whenever he goes swimming he'll wear his swim trunks and his skivvies underneath. That is until we found these swim shorts from Coastal Dog Apparel.

What I didn't realize was my son didn't like the way most of his swim trunks fit and how they'd chafe his legs when he'd swim. There were days they'd spend the entire day at the pool, so he'd be pretty sore in the evenings when he'd try to sleep. The Coastal Dog trunks have a soft, inner short to fight what the makers call "beach rash". When my son first put them on, he said, "they have sliding shorts inside them!!" What he was referring to were the padded, fitted shorts he'd wear under his baseball uniform. He immediately loved the shorts and didn't complain about any chaffing the entire day at the pool with my wife.

These are not "cheap" swim trunks. But let's be honest, those cheap swimsuits are the ones that leave you sore and make you not really want to spend the day at the pool or the beach right? And like the Coastal Dog folks say, "Beach Day Should Be All Day"! The other great thing you've got to keep in mind about Coastal Dog Apparel is that everything is made in America and helps employee people here in America. If that's not enough, 100% of the profits this company makes goes to support charities that focus on helping children.

They've got shorts for men and boys in classic solid patterns as well as a Malibu floral print as well. They also have sweet, worn and tattered looking ball caps as well. Check 'em out and banish beach rash for you and your boys as well! And if you need cargo shorts, make sure to check out different options from sites like https://www.unionbay.com/collections/cargo-shorts-for-men.

I participated in a campaign on behalf of Dad Central for the Cord Blood Registry. I received promotional item to thank me for my participation.

My wife and I are done having kids. When we got married we had been fairly certain that we would have two children and that would be it. After getting pregnant with our first child on our honeymoon, we were halfway done with our "plan" and were pretty much just reacting to life at the moment. As a new husband and now soon-to-be new dad, I wasn't sure what I was adjusting to more, the idea of being married or the idea of becoming a father in a few more short months. How do you really prepare for two of the biggest changes in your life?

We may have been different than most parents in that we chose to not find out the sex of our child before they entered the world. That meant no ultra-sounds and no pre-emptive testing to determine the health of our child. We thought to ourselves that if we did find out there were problems with the baby, would we terminate the pregnancy? No. Thus finding out there was something wrong will make us worry more and then only cause more stress on my wife and the baby. Of course, it is still advised to visit your gynecologist for prenatal checkups. If you need professional pregnancy services, visit https://www.sharp.com/services/pregnancy/.

One thing we knew a little bit about at the time but didn't research as much as I probably should have was how to take advantage of what was available to us to help with possible future health concerns was the ability to take some of the umbilical cord blood and bank it for future use for health concerns. Cord blood is being used as treatment for over 80 different diseases already and shows potential benefits for a variety of other diseases including various forms of cancer.

I can tell you that I'm sure one of the reasons I didn't pursue it for my own kids was a question of financial ability. If I remember correctly, it's been over 12 years now since we were working through our last pregnancy, the cost to obtain the cord blood wasn't the issue, it was the ongoing storage for making it available should we need it in the future. Those costs were seen more as an insurance type of cost and not a medical cost, so there was no coverage assistance for it. Luckily, due to recent legislation introduced, The Family Cord Blood Banking Act, allows healthcare savings dollars and tax savings associated with those costs.

If you and your wife are currently expecting and would like to have more information about Cord Blood Registry and banking options, you can find out more on the cordbankingbasics.comÂ website. They're currently offering a $200 coupon off of their service that's available now through March 24, 2014.

Below is a graphic about an upcoming trial for using cord blood cells to repair issues with acquired hearing loss in children. 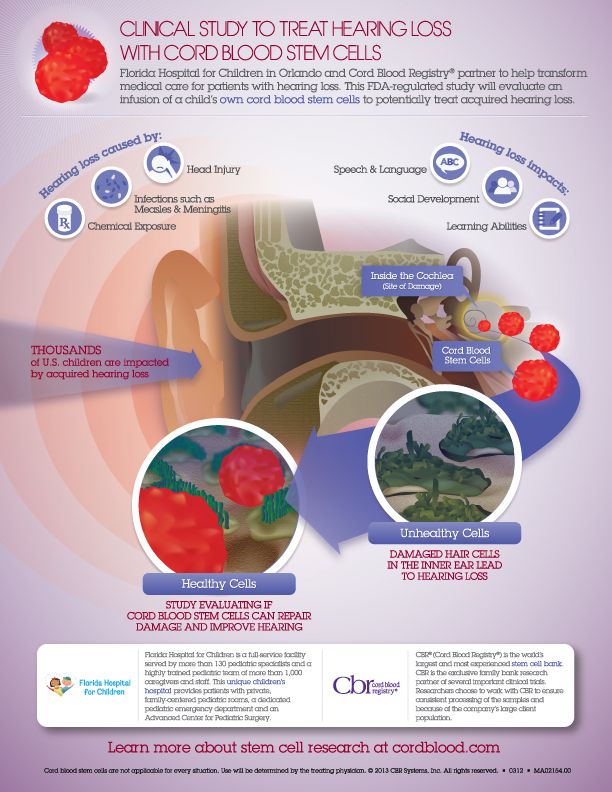 Photo via Pexels Are you growing your business? In business, if you’re not innovating, you’re … END_OF_DOCUMENT_TOKEN_TO_BE_REPLACED

One of the things I love finding when I uncover the Internet is not just a cool website or topic, … END_OF_DOCUMENT_TOKEN_TO_BE_REPLACED