You are here: Home / Archives for spam

It still surprises me the number of people that get taken by these types of spam emails, normally leading to malware installs, identity theft or other annoyances of life in the digital age. For me I hardly ever click on links in an email if I'm not expecting the email from someone already in advance. Even then I take a few quick seconds to scan the email and look for anything that seems fishy to me. Or should that be "phishy"?

Can you spot all the issues with this email I recently received:

Here's another quick Public Service Announcement for you, don't just go clicking on links in emails even when they look like they're coming from legitimate sources.

In this case, if you did indeed have a PayPal account and you were worried about it. Go to their website directly by opening your browser and typing in the URL of the company directly and visiting the site that way. Login to your account and see if there are any warnings or alerts posted there. If the company has a chat feature for support, send them a chat and have them verify if there are or are not any issues with your account that need to be addressed.

I work with a number of individuals and businesses that use WordPress and other content management systems (CMS) to manage their websites. One of the great benefits of these systems is the ability to easily and regularly produce content for your site that your potential and existing customers and clients can engage with through comments and sharing. The challenge that arises is that with the ease of sharing comments, you attract the efforts of spammers, hackers and less than upstanding marketers infiltrating your comment systems and contact forms with junk.

I’ve found myself frequently sharing with clients how to identify spam comments as they come in so they can quickly moderate their site without spending too much time on that effort. I decided I should just take an example and post it and then I could direct future questions from clients to this post.

This is a spam comment submitted through the standard contact form. Here are a few triggers that I see that tell me itâ€™s a spam comment. Although not 100% proof, the likelihood is there so weâ€™ll treat it as spam: 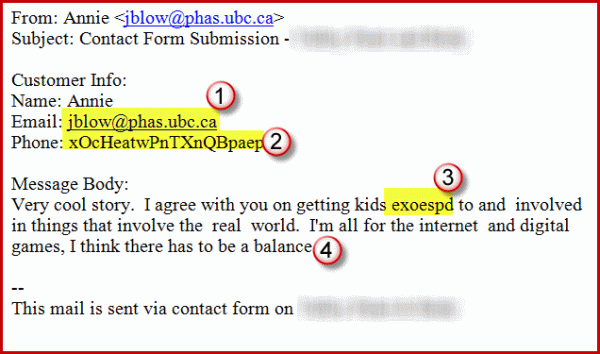 Here’s what I quickly saw:

After all of this, you might ask yourself. Why would someone leave a comment like this in the first place? There are no links included, etc.

So, once theyâ€™ve been had one comment approved, any future comments they leave will be automatically approved. Seemingly benign comments like the one above will be left to hopefully get approved and slip through the system, then an onslaught of comments will start flooding in and all of those will start having links or other â€œadâ€ spam content in them.

A couple of weeks ago now I had the opportunity to help someone in a situation that they felt was there may have been no real solution for in the end. They had exhausted their options and had followed the path to a solution that was the one just about everyone would have taken. They did everything they could to resolve the issue, and weren’t getting anywhere.

A friend of mine, Howard Bienstock, had his twitter account hijacked by spammers and they were using it and taking advantage of his significant list of followers. As of right now, Howard has just over 24,000 twitter followers and they were all getting useless, false and annoying twitter updates from this spammer. They had already setup a new twitter account thinking they would never regain control over their original.

Howard founded OneDegreeConnected.com and is an ultimate business networking machine! Howard’s goose laying the golden eggs is his network and the integrity of his name and that same network. These spammers were getting ready to roast that bird and serve it with SPAM for dinner.

What did I really do to help Howard in this situation?

I don’t have any real special powers. I’m not some amazing security analyst who knows how to work around security problems. I don’t know how to hack into someone’s twitter account and gain back control of everything. So what did I really do?

I took the time to be as helpful as I could and tried to capitalize on my own network to see if I could get anywhere.

I knew the key was to try and get in touch with someone that worked at twitter directly. The problem was that all the standard operating procedures for resolving an issue like this with twitter results in automated steps being performed via email. The spammers had hijacked the account and changed the email address associated with the account. Any validation efforts were going to the spammers for approval, which they would ignore or immediately reject.

I sent out a few tweets of my own to see if anyone in my network might know someone. A couple of people responded. One I expected and one I didn’t. In the end, it was the connection from the person I didn’t expect that go the solution worked out. It worked out quickly at that, within about 5 hours from start to finish from my time getting involved and trying to help.

What did I really do? What did it take to fix the situation?

All I had to do was show an interest in the problem and make the initial contact and ask how I could help. Sometimes being helpful just means just being willing to do what you can and get out of the way. You don’t have to be an expert in something and you don’t have to claim any special amount of "magic" or mystery in getting the problem fixed.

Note: Don’t use a simple password to setup an account thinking you’ll change it later. Use strong passwords. Oh, and don’t write them on Post-It notes and stick them on your monitor.

Covid-19 increased unemployment in many countries. The United States suffered from business … END_OF_DOCUMENT_TOKEN_TO_BE_REPLACED

Online shopping is fast becoming the new norm. Thanks to the freedom, convenience, and ease it … END_OF_DOCUMENT_TOKEN_TO_BE_REPLACED

There are two types of people in the world: Savers and spenders. At Christmas, it is much easier to … END_OF_DOCUMENT_TOKEN_TO_BE_REPLACED